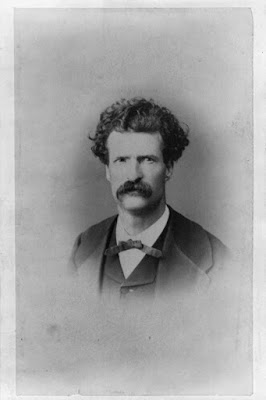 Photo via Library of Congress

It was about the first of September, 1867, in Constantinople. A group of eight Americans walked into the studios of Abdullah Frères, three Armenian brothers who were renowned photographers — “photographers to the Sultan”, as they promoted themselves. Abdullah Frères were famous for their views of Constantinople and their portraits of prominent figures in the Ottoman empire. But the photographs they took of the Americans that day might be the most historic images they would make. For the American tourists were passengers on the Quaker City, the first American cruise ship to tour the Mediterranean. And among their number, not yet 32, was a young man named Sam Clemens, just beginning to make a name for himself as Mark Twain.

In his photograph from Abdullah Frères, Twain is a youngish man with dark, scraggly hair — how different from the gray-headed elder statesman we usually imagine! — but his face is still distinctly Twain’s. The same narrow eyes, the same mustache, the same look of vague disapproval all stare back from the studio portrait. “They take the finest photographs in the world here,” he wrote back to his mother.

At the time, Twain was a journalist who had managed to finagle his way onto the Quaker City cruise. He had convinced his employer, the Daily Alta California of San Francisco, to pay for his fare, in return for covering the journey in a series of letters to be published in the paper. The letters proved popular. That led to a book, The Innocents Abroad, or the New Pilgrims’ Progress (dedicated by Twain to “my aged mother”), published 150 years ago this year.

Tom Sawyer and Huck Finn may rule children’s literature lists and school curricula today, but in Twain’s lifetime it was his autobiographical works that sold the best — Roughing It, Life on the Mississippi, and, above all, The Innocents Abroad. That judgment wasn’t restricted to 19th-century buyers, either; George Orwell, for one, considered them “his best and most characteristic books.”

What made The Innocents Abroad such a success? For one thing, travel literature was popular with audiences, and Twain’s book fit in the genre, if somewhat uncomfortably. Twain keeps writing of his disappointment with the people and places he meets, especially in Palestine. This was nothing new in travel writing. What was new was Twain expressing that disappointment by mocking and insulting travelers and travel writers for paying lip service to the pieties of travel, with their expressions of awe and sentimentality. And he pioneered the image of the boorish American traveling overseas, even titling his lecture tour promoting the book “The American Vandal Abroad.”

But it was all an act. From his first national success, “The Celebrated Jumping Frog of Calaveras County,” and even before, Twain was honing his brand of sleight of hand and misdirection in print. Part wisecracking comedian, part con-man, Twain was something new — and distinctly American — on the literary scene. With The Innocents Abroad, we are lucky that we have so many steps of the con in evidence. Between his travel notebooks, his letters, and the final product, we can see Twain constantly reworking his humor. Sometimes this is to smooth off the rough edges to make it appeal to an Eastern audience, and not just the readers of the Daily Alta California. Other times, it is apparently just to make it funnier.

At the time, The Innocents Abroad was widely hailed as a masterpiece of humor. Critics and other writers hailed the funniest scenes. A favorite was Twain at the Church of the Holy Sepulchre, weeping over the grave of his ancestor Adam — as in Adam and Eve — because they never had the chance to meet. If the absurdity weren’t clear enough, Twain often marked such jokes by footnotes: “Stated to me for a fact. I only tell it as I got it. I am willing to believe it. I can believe any thing.”

Reading through the book today, though, we become less sure what to make of Twain’s humor. Some of it is deeply disturbing, as Twain describes meeting “the wildest horde of half-naked savages” and pictures himself daydreaming about exterminating tribes. This has to be black humor, we tell ourselves, but when we read other writing of the time we begin to wonder. “I believe in the existence of inferior races, and would like to see them exterminated,” Arthur Evans (not yet the famed discoverer of Minoan culture on Crete) could casually write about the Bosniaks of the Balkans, just a few years later.

So perhaps it is not surprising that, even though it seems unlikely that anyone would take The Innocents Abroad as a serious representation of the people and places it describes, this is precisely what has ended up happening. Twain’s morbid joke that train engines in Egypt used mummies for fuel (“sometimes one hears the profane engineer call out pettishly, “D—n these plebeians, they don’t burn worth a scent — pass out a King!”) has led to claims up to the present that this was once a common practice in the country. There is a famous quote at the end of the book about the positive effects of travel — “fatal to prejudice, bigotry, and narrow-mindedness, and many of our people need it sorely on these accounts” — coming after Twain has spent some 600 pages viciously mocking the lands he has visited, the people who live in them, his fellow travelers, and anyone else in sight. Yet the quote is famous because it is often taken as a serious argument by advocates for travel, with Twain hailed for his progressive views.

Above all, it is Twain’s description of 1860s Palestine that has come to be treated humorlessly as documentary evidence. Everyone from Benjamin Netanyahu to Alan Dershowitz, and many in between, have taken The Innocents Abroad at face value here. At least, they have taken parts of it at face value — the parts where he describes Ottoman Palestine as desolate and empty (and not the parts where he doesn’t). They use the same few quotes, with the same ellipses, and in one case give the same wrong location for the scene Twain was describing.

All of this was far in the future when Twain was first approached by a publisher in November of 1867, days after his return, about turning his letters into a book. He clearly had his records of the trip on his mind when he wrote to Emma Beach, one of his fellow travelers on the Quaker City, a month and a half later. Looking for his photographs from Abdullah Frères — the ones he had praised so highly to his mother — Twain found he had misplaced them. “I have searched everywhere for my photographs, but I cannot find a single one,” he informed her. “Those Constantinople pictures were very bad, though. I might almost as well send you a photograph of the Sphynx — it would look as much like me.”

If there’s a lesson to be learned here, in other words, it’s how dangerous it is to take anything Mark Twain says at face value.
Posted by Michael at 9:41 PM

Could it be that Mark Twain is not Samuel Clemmons in real life?