Callousness among the Ruins


On March 27, 2016, the Syrian army recaptured Palmyra from ISIS. By the next day, news headline after news headline trumpeted the liberation of its ancient remains and assessed their status: Damages to Palmyra Ruins in Syrian Recapture Less Than Feared, Experts Say (Guardian). Retaking Syria’s Palmyra Reveals More Shattered Antiquities (AP). 80 Percent of Ancient Palmyra in ‘Good Shape’: Syrian Expert (Middle East Eye). Archaeologists and other scholars shared before and after photos of the damage on social media.

What might not have been clear if you followed the news stories and photographs is that there is also a modern town of Palmyra (Arabic Tadmur) adjacent to the ancient site, with tens of thousands of inhabitants.

And here in microcosm is an unsettling problem/trend of the entire war: media outlets and academic interest have obsessed over ISIS’s treatment of antiquities, often at the expense of dealing with their human victims. Hundreds of thousands of Syrians have died in the war; millions are refugees, millions more internally displaced. But they are muted in our coverage.

We can name the sites that have been looted and damaged: Palmyra and Apamea and Mari – the Temple of Bel, the Arch of Triumph, the Great Mosque of Aleppo. But the Syrian dead are nameless.

There is one important exception to this: Khaled al-Asaad, an archaeologist beheaded by ISIS at Palmyra last year. Why is al-Asaad unique? Because (for academics) we can relate to his field and his interest in the ruins of Palmyra? Or perhaps for another reason. It has been reported that ISIS murdered al-Asaad because he refused to reveal to them the location of antiquities that had been hidden for safekeeping. Perhaps we care about al-Asaad because he made the same calculation of the value of monuments versus human (Syrian) life that we do.

This is a morbid thought – but is it wrong? Consider al-Asaad’s “obituary” in the Daily Mail, written by popular historian Tom Holland. Obituary is Holland’s own word, but I place it in quotes because this is a very unusual example of the genre. Al-Asaad is not mentioned until the eighth paragraph. There are three paragraphs on his death, only one and half on his life – and eight on the history of Palmyra. The piece focuses on that history and its loss at the hands of ISIS. Al-Asaad simply becomes a character within that tragedy – not the real al-Asaad, but an idealization, a “martyr for civilization” as the headline proclaims. Al-Asaad does not speak for himself; instead we speak for him. “We know Khaled al-Asaad felt” that the destruction of Palmyra’s ruins is blasphemy. “He must have anticipated what his fate would be” after transporting Palmyrene artifacts safely out of the city. That ISIS was killing an ideal “was something al-Asaad himself surely appreciated.”

In short, this is an obituary where the deceased barely appears, and when he does he serves as a ventriloquist’s dummy for our own thoughts.

On the other hand, if we actually listened to Syrians themselves, we would find that their relationship with their cultural heritage is much more varied and complex. We would hear that al-Asaad was just one of a network of thousands of employees of Syria’s Directorate-General of Antiquities and Museums, archaeologists and others, that has worked to protect artifacts from ISIS and the Syrian army and various rebel groups alike. And we would hear the archaeologists themselves describe the role that Syrian citizens have played, in preventing ISIS from causing further damage at Palmyra, for instance.

But there are other responses to the monuments, too. Recently, Kanishk Tharoor provided a glimpse in his opinion piece “Life Among the Ruins” for the New York Times. Significantly, Tharoor discussed how these monuments have been a part of the daily lives of the people living in Syria. One voice in that piece belongs to Syrian archaeologist Salam Al Kuntar, currently at Penn: as Al Kuntar says, “I have a special love for Palmyra because the Temple of Baal is where my mother was born.” That is, for so many the monuments are not just archaeological data to be studied or romanticized symbols of civilization, but a very tangible part of everyday life. As it happens, the ancient site of Palmyra itself was continuously inhabited right into the twentieth century. Modern mudbrick houses were built among the ruins of the classical city. 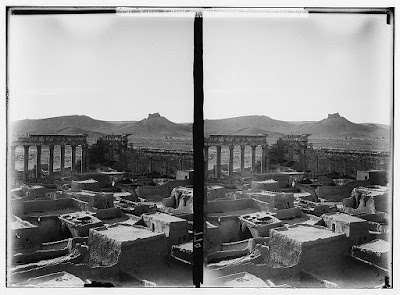 "Palmyra (Tadmor). Native village among the ruins of Temple of the Sun" (i.e., Temple of Bel). c. 1900-1920.
Matson Photograph Collection, via Library of Congress

The inhabitants abandoned the site only in the 1930s, moving to a new town next to the ruins in order to clear the way for French excavations of the ancient site. This reveals as presumptuous the idea that these ruins are owned equally by all of us as part of world heritage. The livelihood of many Syrians depends on these monuments, too: tourism is an important part of the local economy – or at least it was before the war.


Other voices belong to the people of Al Rafid, a village near Quneitra in southwestern Syria. The SMART News Agency posted a video that appears to show villagers dismantling a medieval building in order to rebuild their homes. This is a normal process: archaeologists continually find evidence for how stone is reused again and again at sites. And in the current situation, it feels a little hollow to lecture people about preserving the past when they need to literally rebuild their lives.

Instead of staking presumptuous claims to these monuments, or muting the Syrian victims of the conflict, perhaps we should take a moment of silence. For the dead. For the displaced. And for those who remain, carrying on with their lives.
.
.
.
.
.
.
.
.
.
.
And now, those of you who wish are free to return to mourning lifeless stone.
Posted by Michael at 10:56 AM