Joseph's Tomb and the Universal Value of Heritage 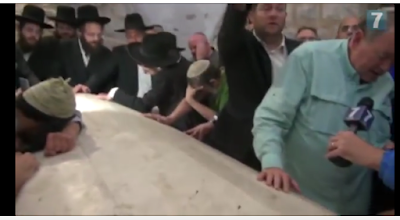 In a recent blog post, Christopher Jones discussed the evolution of frameworks for dealing with cultural heritage over the last two centuries. The current framework is centered on national sovereignty, as Jones notes: national cultural heritage laws generally vest ownership of artifacts and monuments (unsurprisingly) in the nation-state, and international agreements center on national signatories and mechanisms to repatriate to source countries. But Jones notes increasing tensions with this framework – both international (the concept of global heritage) and local. When we say that something is global heritage, or shared heritage, that appears to be staking a claim to ownership of that heritage. It is no longer national.

Erich Hatala Matthes, a philosopher focusing on the ethics of heritage, has identified a similar tension between the value of cultural heritage for specific groups and the universal value of cultural heritage.[1] His work suggests, however, that it is possible to bridge the gap between these two views.[2] He points to alternative ethical accounts of recognition of value, or respect for heritage – that some things may be valued without ownership, or recognized to have value, or respected by everyone, regardless of whether everyone finds them actually valuable. Matthes is less concerned with arguing for the fact of universal value – his starting point is that at least some examples of cultural heritage have (or appear to have) universal value, and is merely trying to explain why that might be. (This marks a contrast with the concept of global heritage, which is often invoked with the assumption that all heritage should matter to everyone.) These models would relieve the tension between the universal and the national.

Or do they? With heritage – at least as heritage is understood under the current framework – I have become increasingly skeptical of our ability to escape ownership claims. For those who claim merely to value heritage, or that it is cultural or spiritual heritage (and not a literal claim to ownership), these concepts often bleed together – including insisting what other countries should do with their heritage. Consider the case of Palmyra, where, after three centuries of seeing the ancient ruins as part of their own past as opposed to that of the people living there, Europeans and Americans can still lecture Syrians on how to reconstruct (or not) the site after ISIS. Or the case of the Parthenon sculptures (aka the Elgin Marbles), where the British Museum uses “shared heritage” as justification for its continued ownership of the sculptures and refusal to repatriate them to Greece.

The Parthenon sculptures point toward the clearest problems: cases of contested heritage, where multiple groups (nations, ethnic groups, religious groups, etc.) directly vie for physical control of a monument or group of artifacts, even vying for control of the meaning – who gets to determine what it means. Having worked for many years in Israel, I have continually come across examples of contested heritage. Here I would like to highlight one specific example that may be illuminating: Joseph’s Tomb at Nablus. 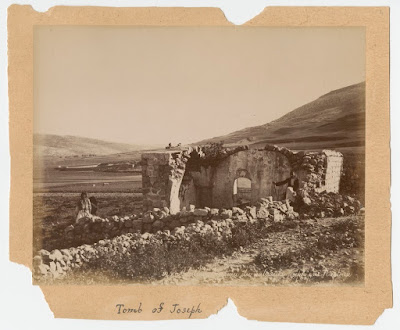 Joseph’s Tomb (Arabic Qabr Yūsuf, Hebrew Qever Yosef) is located in Balata on the outskirts of Nablus.[3] The current structure largely dates to the late 19th century and later, but is ultimately a renovation of an earlier building. The site itself, or a site very close by, has been revered as the burial place of the biblical Joseph (Yusuf of the Qur’an) since at least the fourth century. It is mentioned by a long parade of travelers, pilgrims, and geographers, starting with Eusebius, in close connection with the traditional Well of Jacob; the current structures are only a few hundred meters apart.

The place was considered sacred by Jews, Christians, Muslims, and Samaritans alike. 18th-century itinerary books for Jewish pilgrims included Joseph’s Tomb at Nablus among their lists of sacred places and provided a prayer to be said. Explorers in the 19th century noted Hebrew inscriptions on the wall, one dating to 1749 (in the month of Sivan 5509 in the Hebrew calendar) describing a repair of the building at that time. They also noted that Jews and Samaritans burned incense in the hollowed tops of the two columns that flanked the cenotaph (the empty above-ground monument marking the place of burial) in the center of the tomb building. Travelers focused on the shrine’s importance to Jews and Samaritans, but they routinely observed that Christians and Muslims also considered it a holy place. The shrine itself looks like a typical Muslim sanctuary or maqām‎: a small room with a dome on top, and an adjacent partly-closed courtyard. Tawfiq Canaan, author of the definitive study of Muslim sanctuaries in Palestine (1927),[4] remarked that in his time Muslims understood the shrine to be the shrine of the son of Jacob. All religious communities, it seems, understood the site as dedicated to the same biblical/quranic figure.[5] 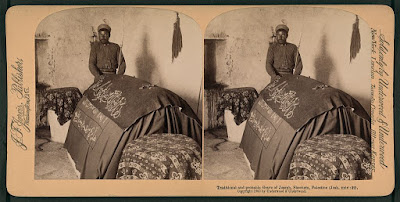 Stereograph of man in interior of Joseph's Tomb, c. 1900
(J.F. Jarvis, via Library of Congress)

But in recent decades this situation has drastically changed. After 1948, many Muslim shrines lost importance among local communities; some of the festivals (such as the Nabi Musa festival for the Jerusalem region and the Nabi Rubin festival in the southern coastal plain) were suppressed by Jordan or Israel. With Israel’s takeover of the West Bank after 1967 came visits of religious Zionists to Joseph’s Tomb – while Palestinians were banned from the site in 1975. Even after Israel transferred jurisdiction of Nablus to the Palestinian Authority in 1995, it still maintained control of the tomb with an IDF outpost there. A yeshiva with extremist ties named Od Yosef Chai (“Joseph still lives”) had been founded at the site in the 1980s, but was relocated to the nearby settlement of Yitzhar in 2000.[6] At that time, with the beginning of the Second (Al-Aqsa) Intifada, residents of Nablus burned the tomb, destroyed the yeshiva, and killed a Druze border policeman; subsequently Israel completely withdrew from Joseph’s Tomb and Nablus. In the years since, visits to the tomb in the middle of the night by groups of religious Israeli Jews, escorted by the Israeli military, are regular occurrences. One such trip earlier this year included roughly 4000 Jewish worshipers plus former Arkansas governor Mike Huckabee. Palestinians in Nablus now maintain – in contrast to widespread belief before 1948 – that the tomb is merely that of a local sheikh named Yusuf. Local residents have vandalized the tomb multiple times. 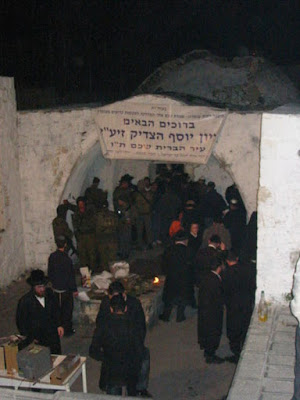 Group of religious Jews and soldiers at Joseph's Tomb, November 2009.
Note the damaged dome.
(Photo by Shuki, via Wikimedia Commons)

What accounts for the massive shift in Palestinian attitudes toward the tomb, between the British Mandate and today? In Facts on the Ground (2001), Nadia Abu El-Haj suggested that the tomb – given its handling in the decades of Israeli control – had come to be seen as monument to Israeli colonialism.[7]

This conclusion parallels Morag Kersel’s work on looting in the West Bank.[8] While it is commonly believed that antiquities looting is caused primarily by economic factors, and it is true that collectors’ demand for artifacts is a central driver of the market, this is only one of four major motivations identified by Kersel based on interviews with Palestinians. One of the other three is resistance: “In repeated interviews I was told that one of the motivating factors for looting was a resistance to the Israeli occupation and subjugation of the Palestinian people.”
Even if the looted artifacts are (or could be understood) as part of the Palestinian past, looters see them only as belonging to the Israeli past: “Interviews with Palestinian archaeologists and government employees confirmed that the Palestinian looter, regardless of whether he digs in Israel or the PA, does not identify the material remains as his or her past but as an Israeli past, and it therefore should be eradicated.” For many (not all) Palestinians, Joseph’s Tomb has been transformed from a sacred place to a symbol of occupation – it is what Lynn Meskell has identified as “negative heritage.”[9] It conjures not positive but negative memories, in a way we normally ignore when we think about heritage.

However much we may deplore vandalism and destruction, can we expect or even demand that everyone respect or recognize the value of Joseph’s Tomb? We are in a situation where two groups attribute meanings to the structure – one positive, one negative – that directly conflict; and where a single group’s meaning underwent significant change within a few decades. Can we as scholars or outside observers insist on treating only one view – the Israeli one – as legitimate? This question is not just academic. Several scholarly reviews of Abu El-Haj’s Facts on the Ground harshly criticized her merely for trying to understand Palestinian motivation for vandalizing Joseph’s Tomb.[10] Especially in the context of occupation of the West Bank, it seems superficial to focus on condemning vandalism and damage to a building – though the loss of life in the 2000 attack is another matter.

Certainly not all forms of heritage are as contentious as Joseph’s Tomb, not all places filled with as much tension as Israel/Palestine. In places like the Haram al-Sharif/Temple Mount, Palestinians and Israeli Jews attribute different meanings even to metal detectors. But the same issues, in stark outline there, can be found all around us once we start looking for them – often just waiting for the time to erupt. In the U.S. they are the natural product of disturbing aspects of history like slavery, Jim Crow, and displacement of Native Americans. Recent examples include fights over Confederate monuments, Native American sacred sites and burial grounds, and so many more. I am still working my way through these issues; with all of their complexity, I imagine we all are. But I am increasingly uncertain of any universal model for respecting or recognizing the value of heritage.